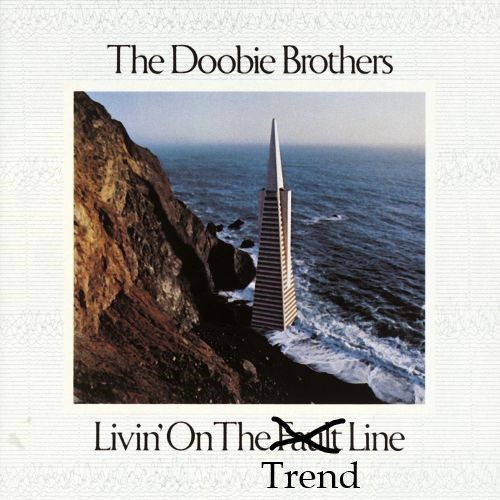 On a recent episode of Back to Work, there was a passing mention of The Hacker's Diet, which more or less boils down weight loss to an engineering problem. Weight and calories are numbers, and getting one number to another is just math. This was part of a discussion of finding a “hook” to make a habit stick. I got to thinking about long-term goals in a wider sense, and was struck by the idea of maintaining a trend.

Per Wikipedia (emphasis mine):

[John] Walker presents techniques for Excel-aided or paper-and- pencil data smoothing to allow the dieter to adjust the diet for themselves using the long-term trend and to not be discouraged by short-term fluctuations based on water retention or other factors.

The success or failure of any one given day is almost beside the point. Fucked up your routine? No sweat. Overate? It's all good. Didn't write enough? You'll get 'em tomorrow. You're playing the long game. The ultimate goal is to maintain the trend. The immediate result matters way less than your deliberate efforts.

We just started a new decade, and I can see the trend bear fruit. In 2010, I was 22 and a dumbass. Now it's 2020, I'm still a dumbass, but I have two degrees under my belt1, I'm a kinder person than I was, and I'm a better writer to boot. Days and months and years do add up, even if they are non-consecutive.

1: This doesn't mean anything per se, I'm just proud of the work I did in school.