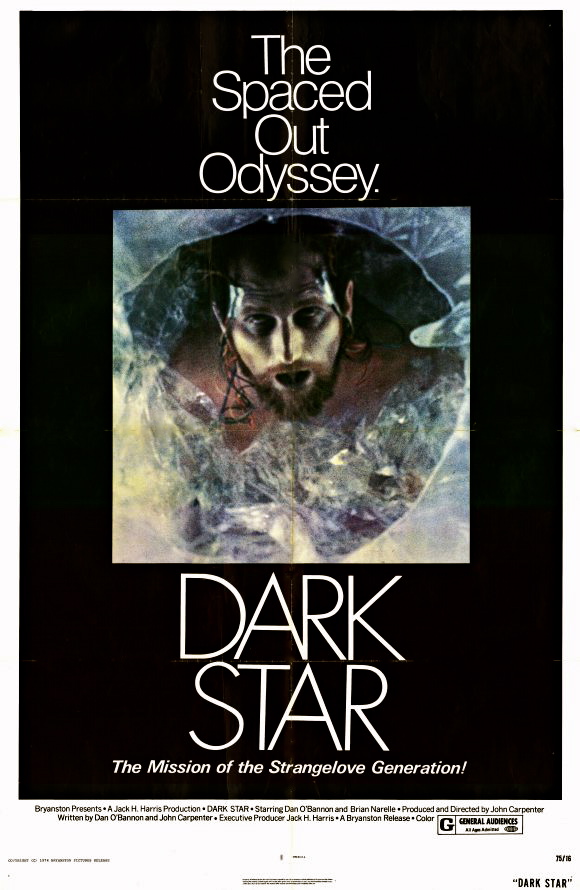 The first hint is right there in the poster copy: “The Spaced Out Odyssey.” The photo beneath the tagline, of a body on ice with electrodes affixed to its face, would normally evoke chills. But in context, we understand that a face frozen in a rictus of dulled pain visually rhymes with what being gacked out on primo bud looks like.

Dark Star, directed by John Carpenter and co-written by Carpenter and Dan O'Bannon, premiered on 30 March 1974 at the Los Angeles International Film Exposition. At the risk of being glib, it plays like a stoner Alien (not surprising since O'Bannon strip-mined Dark Star for parts for his Alien script), similarly concerned with the existential tedium of being a working stiff on the final frontier. But it is above all else Carpenter's weed-dad opus, a heady, rambling, pseudo-philosophical cosmic yarn about mental entropy that for no short amount of time prioritizes a slapstick set piece featuring an alien that looks suspiciously like a beach ball. This movie would slot in nicely on a shelf next to Star Trek: The Motion Picture on VHS or a dog-eared copy of Zen and the Art of Motorcycle Maintenance.

There isn't really much competition for Dark Star's weed-dad title belt in Carpenter's oeuvre; after his debut, his movies almost immediately became leaner, sharper, and more sinister. The only real challenger for the crown is They Live, with its EC Comics-indebted anti-authoritarian, anti-consumerist sci-fi phantasmagoria. And if there's two things weed dads hate, it's the Man and how the Man tells 'em what to do, man. But there's too much ire and fury in They Live for it to be Carpenter's weed-daddest movie. The key moment of political discourse in They Live is Roddy Piper beating the dogshit out of Keith David so he can make him wear his false consciousness-obliterating sunglasses. The key moment of political discourse in Dark Star is when a Bill Ward-looking motherfucker raps with a bomb about phenomenology to keep it from exploding. Far out.